I was 12 years old when I first came here in America. We were on our summer vacation-that would be around March in the Philippines. My uncle took my brothers and I to our first camping trip (somewhere between Nevada and Arizona) which I still pretty much remember up to this day. My aunt would always remind me to keep my snacks hidden or else a bear would come sneak up on me at night. That really terrified me the entire night. She and my uncle more than made up for it though by taking us to some jaw-dropping places like the Yosemite, The Grand Canyon, Bryce, and Zion. Now I’ve been to the Grand Canyon more than I care to remember, but I would love to go back with the kids this time. Below is a list of national parks I want to take my family to.

The Grand Canyon in Arizona – I want to come back here and actually stay for a day or two. Did you know that parts of the canyon might be tens of millions of years old but the canyon itself as a whole is only a few million years old, like 5 or 6? thought so.

Glacier National Park in Montana – I could have sworn this was in Switzerland. We better go soon because of climate change.

Crater Lake in Oregon – Is a caldera lake just like the one in Taal in the Philippines.

Yellowstone National Park in Wyoming – I would love to take my dad here. This park is known for its geothermal peculiarities and great ecosystem.

Grand Teton National Park in Wyoming – This is only 10 miles away from Yellowstone so this is definitely our second stop from the list (Yellowstone is first). Famous for its jagged peaks, the park has the same ecosystem as Yellowstone and is a very popular destination for mountaineering, hiking, and fishing.

I used to make websites a long time ago when basic HTML was king, but that did not fare well. I also used to make cakes and pastries for other people, but I had to leave the Philippines and start a brand new chapter in my life here in America. Point is, Rentcares.com is officially my first business and I couldn’t be more thrilled. When my husband and I decided that I stay at home to raise the kids, I was beyond excited. Not only do I love being a homemaker, I also love not waking up early to go to work. Downside is I miss earning money. When I first thought about this rental business, I immediately bought the domain name and wrote the terms and conditions without any help from my husband (who is a lawyer). I began constructing the website a week later and just under two weeks, we went live. Two days later, I had my first customer. Her name’s Sarah and she made me very happy that day. The same name also happens to be the most popular name of my female customers. For men, yes, fathers and grandfathers have graced my reservation system too, it is Robert. I’ve chatted with a lot of mommies over the phone about our kids and I’ve met a few of them at a Starbucks as well. So far, out of hundreds of customers, no one has stolen my property. I have lost three CARES but it was immediately paid and/or replaced by my customers. What else? Oh, repeat customers! They make me want to do a happy dance.

I am very grateful to all of you who have supported my business especially when I found out I wasn’t the only one who does rentals (I literally thought I invented it HAHA), thank you for visiting my website and for staying and coming back. I truly appreciate it.

A very Happy, Healthy and Prosperous 2015 to you all!

I really thought August would be a slow, dull month in terms of booking, but I found myself going to the post office every other day. I love that I’m getting a lot of business but with two kids in tow, lunches and dinners to prepare and a bunch of errands to run, I wanted nothing to do with the post office. I was soooo looking forward to the 3-day weekend. All I wanted to do was doze off and barbecue. But then…

Early saturday morning hubby and I decided to plan something. We wanted to go to SF but because of the recent earthquake, we decided to go to Carmel and Monterey instead and called to make a hotel reservation at Ventana. BIG MISTAKE. Everything was going smoothly until after our lunch stop at Solvang. A few minutes after we left, my daughter started throwing up her lunch. We thought it was just motion sickness so we carried on. Once we’re at San Simeon, she threw up again. We were 10 minutes away from Hearst Castle so we decided to stop by and let the kids run around and get some fresh air. She ate, drank and was very happy. Two hours into our trip, somewhere in Big Sur, she threw up for the third time. Every parent would be alarmed the first time but since she was in a good mood, no fever, no signs of lethargy or anything, we thought it was just a good ol’ spit up. Anyway, the third one alarmed me because we had no cellphone signals (thanks t-mobile!) and we were stuck on a winding road a few miles away from the freeway or any city and hospitals and NO GOOGLE. Ugh. Fortunately, she fell asleep and by the time she threw up again, we were in a city (don’t know which one actually, but it was an hour away from SF!) and had phone signals. We called a nurse and told her everything that happened. She said it might be a bug and not to give her any food for an hour. Thats when we decided to just go back home because if she’s not fine the next day, we didn’t want the hassle of taking a child into a hospital 600 miles from home. So we drove into the night while the kids are asleep. My parents met us in Santa Barbara at 2 am to take my son for the weekend and so I could take care of her and let my husband rest. Thankfully, she was okay the next day in spite of the onset of diarrhea.

On a different note, my son just started preschool last week and I couldn’t be more excited for him. I was crying, he was crying, we were all crying. Long story short, he hated school. LOL. 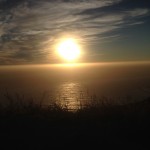 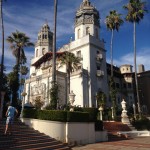 it was too hot in solvang. after that lunch that gave her a bug 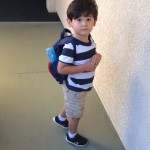 first day in school! right before he started wailing.

Shop our lightly used CARES! At least 60% off retail price

We have used Rent Cares twice now for our toddler and the ease of shipping and ordering is such a cinch! I highly recommend using this company for your next trip.